Time spent at school: Teacher of French from 1970 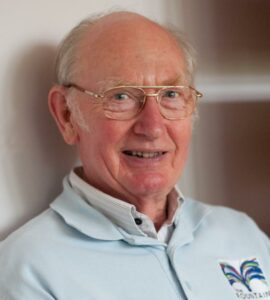 Peter was one of the kindest, most generous gentlemen one would ever have the pleasure of meeting.  With every conversation he had, his attention was genuine and heartfelt.  It did not matter what topic you wanted to discuss; Peter was always ready for a discussion. Indeed, if he ever talked about something and the other person was not sure of the topic, you could be assured he would be there the following week with a book where he had found information to enlighten you on whatever topic it was.  Peter was old school so there was no Googling for him!  In this harsh world that we live in, let us all be more like Peter.  Generous of heart.  Kind in our deeds. And gentle with each other.

The Fountain Centre is a small independent cancer charity located within St Luke’s Cancer Centre at the Royal Surrey Hospital. Its aim is to provide holistic and emotional support, information and signposting, both online and face-to-face, to as many patients as possible. Peter volunteered in the Fountain Centre for many years and was part of the FC family who will miss him.

Peter taught me French in the Sixth Form.  He was one of my favourite teachers, with his gentle encouragement and easy-going style which created a good atmosphere in the classroom. We studied Pagnol and I really enjoyed the books we did with him ( Le château de ma mère, La Gloire de mon père). He made the grammar and translation classes fun and interesting.  He never humiliated or belittled the students. We kept in touch over the years and I have a number of letters and cards from him, including one which outlines his National Service when he learned Russian. It was always good to see him at the various reunions held over the years.